What is this Mighty SATURN V Rocket? 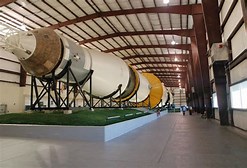 The restored Saturn V rocket, at The Johnson Space Center, is the only one of three remaining, to be comprised completely of stages built for spaceflight. 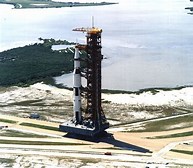 The powerful Saturn V rocket is rolled onto Launch Pad 39A at Kennedy Space Center.

Saturn V rocket is shown lifting off from Kennedy Space Center in Florida.

The next stage of Americas Moon rocket is taking shape to dramatically reduce travel time in space and carry more on a single flight. The purpose of the new Moon rocket is to explore the Moon thoroughly and learn if we could reach it by 2028.

After announcing the formation of Space Force, Vice-President Pence, who chairs the newly resurrected National Space Council, said, “Apollo 11is the only event in the 20th century that stands a chance of being widely remembered in the 30th century.

Apollo 11 is the incredible story of how a nation forged the technology during the turbulent 1960s to slip humanity from the bonds of its native planet.

Today the Command Module of Apollo 11 is a relic from another age, 11,700 pounds of aluminum alloy, stainless steel and titanium, built in Downey, Calif.

Poppy Northcutts experience as the first woman involved in NASA’s Mission control, says that Apollo 11 is nothing short of awe-inspiring, and that, on this 50th anniversary of the Apollo 11 landing, it still has the capacity to teach, as well as astound.

Poppy Northcutt discusses her work in mission control, then later as Women’s Advocate and attorney: