What is the “Crazy Horse” Memorial? 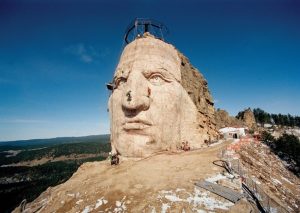 The Crazy Horse monument in the Black Hills of Dakoda, was meant to be a memorial to one of the greatest chiefs of the Oglala Sioux tribe of Indians who live in South Dakoda. 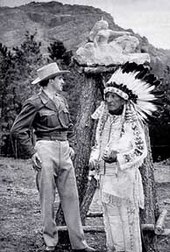 The monument begun in 1948, when Oglala elder, Henry Standing Bear, commissioned Korczak Ziolkowski, a sculptor from Connecticut, to carve a memorial to Crazy Horse, out of Thunderhead Mountain, land considered sacred by some Oglala Lakota indians.

( The picture to the LEFT is sculptor, Korczak Ziolkowski and Henry Standing Bear )

Ziolkowski, at the time, promised to dedicate his life to the effort, but he greatly underestimated the scale of this undertaking. His promise turned out to be a multi-generational commitment.

The monument, under construction for the past seventy-two years, is one of the top tourist attractions in Dakoda, and few of Ziolkowski’s family members who have been associated with it say that they are deterred by the prospect that they will not live to see its completion.

“It’s their dream, and they’re going to get it done,” said T. Denny Sanford, a businessman and philanthropest, who has donated $10 Million to the project. “I don’t care if it takes another 100 year.”

To put this in historical context:

In 1868 the United States government made a promise to the Sioux tribes that are now in North Dakota and South Dakota, that the Black Hills would be “set apart for the absolute and undisturbed use and occupation” of the Sioux Nation.

Six years later the government sent General Custer and the Seventh Calvery into the Black Hills, in search of gold, setting off several battles with the Sioux, which Crazy House and his warriors won at Rosebud and the Little Bighorn.

After these battles and others, there followed many years of the Sioux tribes being forcefully moved onto reservations, and struggling to survive in poverty situations.

In 1890, hundreds of Lakota, mostly women and children, were killed by the Army near a creek called Wounded Knee—where Crazy Horse’s parents were said to have buried his body—as they travelled to the town of Pine Ridge. Twenty of the soldiers involved received the Medal of Honor for their actions.

In 1975, the U.S. Court of Federal Claims wrote, of the theft of the Black Hills,

“A more ripe and rank case of dishonorable dealings will never, in all probability, be found in our history.”

In 1980, the Supreme Court ruled that the Sioux should receive compensation for their lost land. The tribes replied that what they wanted was the hills themselves; They responded that taking money for something sacred was unimaginable.

The funds ordered by the Supreme Court went into a trust, whose value today, with accrued interest, exceeds $1.3 billion. It remains untouched.

Below is a brief history of The Crazy Horse Memorial:

The Crazy Horse Memorial is a mountain monument under construction on privately held land in the Black Hills, in Custer County, South Dakota, United States. It will depict the Oglala Lakota warrior, Crazy Horse, riding a horse and pointing into the distance.

The memorial master plan includes the mountain carving monument, an Indian Museum of North America, and a Native American Cultural Center. The monument is being carved out of Thunderhead Mountain, on land considered sacred by some Oglala Lakota, between Custer and Hill City, roughly 17 miles (27 km) from Mount Rushmore. The sculpture’s final dimensions are planned to be 641 feet (195 m) long and 563 feet (172 m) high. The arm of Crazy Horse will be 263 feet (80 m) long and the head 87 feet (27 m) high; by comparison, the heads of the four U.S. Presidents at Mount Rushmore are each 60 feet (18 m) high.

The monument has been in progress since 1948 and is far from completion. If completed as designed, it would become the world’s second tallest statue, after the Statue of Unity.

Crazy Horse was a Native American war leader of the Oglala Lakota. He took up arms against the U.S. Federal government to fight against encroachments on the territories and way of life of the Lakota people. His most famous actions against the U.S. military included the Fetterman Fight (21 December 1866) and the Battle of the Little Bighorn (25–26 June 1876). He surrendered to U.S. troops under General Crook in May 1877 and was fatally wounded by a military guard, allegedly while resisting imprisonment at Camp Robinson in present-day Nebraska. He ranks among the most notable and iconic of Native American tribal members and was honored by the U.S. Postal Service in 1982 with a 13¢ postage stamp that is part of its Great Americans series.[5]

In October 1931, Luther Standing Bear, Henry’s older brother, wrote to sculptor Gutzon Borglum, who was carving the heads of four American presidents at Mount Rushmore. Luther suggested that it would be “most fitting to have the face of Crazy Horse sculpted there. Crazy Horse is the real patriot of the Sioux tribe and the only one worthy to place by the side of Washington and Lincoln.”

Borglum never replied. Thereafter, Henry Standing Bear began a campaign to have Borglum carve an image of Crazy Horse on Mt. Rushmore. In summer of 1935, Standing Bear, frustrated over the stalled Crazy Horse project, wrote to James H. Cook, a long time friend of Chief Red Cloud‘s, “I am struggling hopelessly with this because I am without funds, no employment and no assistance from any Indian or White.”

On November 7, 1939, Henry Standing Bear wrote to the Polish-American sculptor Korczak Ziolkowski, who worked on Mount Rushmore under Gutzon Borglum. He informed the sculptor, “My fellow chiefs and I would like the white man to know that the red man has great heroes, too.”

Standing Bear also wrote a letter to Undersecretary Oscar Chapman of the Department of the Interior, offering all his own fertile 900 acres (365 ha) in exchange for the barren mountain for the purpose of paying honor to Crazy Horse.

The government responded positively, and the U.S. Forest Service, responsible for the land, agreed to grant a permit for the use of the land, with a commission to oversee the project. Standing Bear chose not to seek government funds and relied instead upon influential Americans interested in the welfare of the American Indian to privately fund the project.

After Ziolkowski died in 1982 at age 74, his widow Ruth Ziolkowski, took charge of the sculpture, overseeing work on the project as CEO from the 1980s to the 2010s. Ruth Ziolkowski decided to focus on the completion of Crazy Horse’s face first, instead of the horse as her husband had originally planned. She believed that Crazy Horse’s face, once completed, would increase the sculpture’s draw as a tourist attraction, which would provide additional funding. She also oversaw the staff, which included seven of her children.

Sixteen years later, in 1998, the face of Crazy Horse was completed and dedicated; Crazy Horse’s eyes are 17 feet (5 m) wide. Ruth Ziolkowski and seven of the Ziolkowskis’ 10 children carried on work at the memorial. Daughter Monique Ziolkowski, herself a sculptor, modified some of her father’s plans to ensure that the weight of the outstretched arm was supported sufficiently. The foundation commissioned reports from two engineering firms in 2009 to help guide completion of the project. Work commenced on the horse after two years of careful planning and measurements.

Ruth Ziolkowski died 21 May 2014, aged 87. Monique Ziolkowski, a daughter, became CEO and three of her siblings continue to work on the project, as well as three of the Ziolkowskis’ grandsons.

The memorial is to be the centerpiece of an educational/cultural center, to include a satellite campus of the University of South Dakota, with a classroom building and residence hall, made possible by a US$2.5 million donation in 2007 from T. Denny Sanford, a philanthropist from Sioux Falls, South Dakota. It is called the Indian University of North America and the Indian Museum of North America. The current visitor complex will anchor the center. Sanford also donated US$5 million to the memorial, to be paid US$1 million a year for five years as matching donations were raised, specifically to further work on the horse’s head.

Paul and Donna “Muffy” Christen of Huron, South Dakota, in July 2010, announced they were donating US$5 million in two installments to an endowment to support the operation of the satellite campus. It holds classes in math, English, and American Indian studies courses for college credit, as well as outreach classes. The memorial foundation has awarded more than US$1.2 million in scholarships, with the majority going to Native students within South Dakota.

The Memorial foundation began its first national fund drive in October 2006. The goal was to raise US$16.5 million by 2011. The first planned project was a US$1.4 million dormitory to house 40 American Indian students who would work as interns at the memorial.

Crazy Horse resisted being photographed and was deliberately buried where his grave would not be found. Ziolkowski envisioned the monument as a metaphoric tribute to the spirit of Crazy Horse and Native Americans. He reportedly said, “My lands are where my dead lie buried.” His extended hand on the monument is to symbolize that statement.

Elaine Quiver, a descendant of one of Crazy Horse’s aunts, said in 2003 that the elder Standing Bear should not have independently petitioned Ziolkowski to create the memorial, because Lakota culture dictates consensus from family members for such a decision, which was not obtained before the first rock was dynamited in 1948. She said:

They don’t respect our culture because we didn’t give permission for someone to carve the sacred Black Hills where our burial grounds are. They were there for us to enjoy and they were there for us to pray. But it wasn’t meant to be carved into images, which is very wrong for all of us. The more I think about it, the more it’s a desecration of our Indian culture. Not just Crazy Horse, but all of us.[

Seth Big Crow, whose great-grandmother was an aunt of Crazy Horse’s, said he wondered about the millions of dollars which the Ziolkowski family had collected from the visitor center and shops associated with the memorial, and “the amount of money being generated by his ancestor’s name”. He said:

Or did it give them free hand to try to take over the name and make money off it as long as they’re alive and we’re alive? “When you start making money rather than to try to complete the project, that’s when, to me, it’s going off in the wrong direction,” he said.