What are Paul Allen’s Plans for “Space” 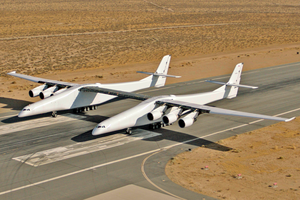 Picture to the left is Paul Allen’s Stratolaunch Aircraft

I have always been interested in space travel, and this article By Christian Davenport, from The March, 2018 Washington Post shows how Paul Allen, one of the founders of Microsoft is bringing us closer to reliable, sustainable transportation into Earth orbit, with the worlds largest airplane called “Stratolaunch,” ( with 2 fuselages, and a wingspan of 385 feet ) and his “Black Ice” shuttle.

If you have an interest in experiencing

check out my website for my science fiction novel,

A massive airplane being built by Microsoft co-founder Paul Allen moved a step closer to flight, when it crept out of its hangar in Mojave, Calif., and practiced rolling down the runway, hitting a top speed of 46 mph. 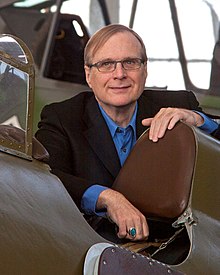 Picture to the left is Paul Allen

Known as Stratolaunch, the plane has a wingspan even greater than that of business mogul Howard Hughes’s famed Spruce Goose and is designed to carry as many as three rockets, tethered to its belly, to about 35,000 feet. Once aloft, the rockets would drop, then fire their engines and deliver satellites to orbit.
But Allen has even bigger ambitions for Stratolaunch and is considering pairing it with a new space shuttle that’s known inside the company as “Black Ice.

Returning to human spaceflight could be a possibility sometime in the future, said Allen, the billionaire entrepreneur, who founded Microsoft with Bill Gates and now owns the Portland Trail Blazers and Seattle Seahawks.
“If you caught the bug back in the Mercury era, of course it’s in the back of your mind,” he said. “But I think you’re seeing right now, other than [space station] resupply missions, most spaceflights are about launching satellites. That’s the reality. And they are extremely important for everything from television to data all over the world. You can get data in the Kalahari Desert because there’s a satellite up there.”

Stratolaunch has generated all sorts of interest, a curiosity that for years was being built in secret inside a hangar so big that the contractor fashioning it, Scaled Composites, needed special permits just for the construction scaffolding.
Vice President Pence has visited the plane in its hangar and walked across its wingspan. Air Force Secretary Heather Wilson has dropped by to see it as well, writing on Twitter that she had “the chance to see firsthand how Stratolaunch is developing an air-launch platform to make space more accessible.”
Allen made history in 2004, when he hired Scaled Composites to build another spacecraft called “SpaceShipOne” that won the Ansari X Prize when it became the first nongovernmental vehicle to reach the edge of space. Allen ultimately licensed the technology behind the spacecraft to Richard Branson, whose Virgin Galactic is now pursuing its own plan to fly tourists to space aboard yet another new space plane, known as “SpaceShipTwo.” 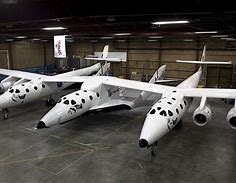 Picture to the left is Spaceship 2 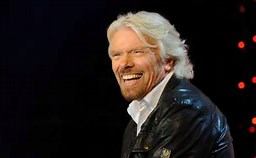 Picture to the left is Richard Branson

“Flying test pilots, I understand,” Allen said. “But paying-man-on-the-street-type passengers, I wanted to leave that to someone else.”
After bowing out of the space business, Allen eventually returned to pursue one of his greatest passions, and in 2011 announced that he was building Stratolaunch. “You have a certain number of dreams in your life you want to fulfill,” he said at the time. “And this is a dream that I’m very excited about.”
Allen, a connoisseur of antique planes, has amassed a collection of World War II relics that he had painstakingly refurbished. He recovered them from old battlefields — a Messerschmitt, a German fighter plane, was dug out of a sand dune on a French beach where it had been buried for decades; an Ilyushin IL-2M3 Shturmovik was pieced together from the wreckage of four planes recovered in northwest Russia.

To showcase his collection, Allen created a museum, the Flying Heritage & Combat Armor Museum in Everett, Wash., which features a Grumman F6F-5 Hellcat and a B-25 Bomber, among others.
As a child, Allen knew all the names of the Mercury 7 astronauts, as if they were the players of his favorite baseball team, and he wanted to be an astronaut when he grew up. But then in the sixth grade, he no longer could see the blackboard, even from his front-row seat. His nearsightedness meant “my dreams of being an astronaut were over,” he said. “Somehow I knew you had to have perfect eyesight to be a test pilot, and so that was it for my astronaut career.”
He once tried to launch the arm of an aluminum chair by packing it with powdered zinc and sulfur and firing it from a coffeepot, he recalled in his memoir, “Idea Man.” It didn’t work.

“Turns out the melting point of aluminum was lower than I understood,” he said.
As an adult, his passion for space continued. In 1981, he went to the Kennedy Space Center to watch the first shuttle launch. “The sound was unbelievable,” he recalled. “The air was vibrating, and you could feel compression waves going into your chest. … You could feel the heat from the engines on your face.” Allen watched it alongside the thousands who had packed the Florida coastline, many yelling: “Go! Go! Go!” “It was so inspiring,” he said.
In a post on Stratolaunch’s website, Allen said he has long been “enthralled by the idea of space exploration. … But I would have never imagined that, more than 50 years later, access to low Earth orbit would still be costly, complex and difficult. I am determined to change this to help maximize the potential of space to improve life here on Earth.”

A fully reusable shuttle would go a long way toward doing that, especially if it were capable of deploying constellations of small satellites. In the interview, Allen said he was keenly interested in that technology.
“The capabilities of these small satellites is something that’s really interesting and fascinating, both for communications, where a lot of people are putting up constellations of satellites for monitoring the challenged health of our planet,” he said. He’d become particularly interested in how space could be used to keeping an eye on “things like illegal fishing in the ocean, which is an increasing problem.”

Below is a link to the Washington post article by Christian Davenpor, which has 2 videos of Paul Allen’s New plane;