Here is a picture of my wife, Celene, wearing sunglasses, and her friend and business associate Jane, in front of a massive natural rock formation in Northern Australia, Uluru, also called Ayres Rock.

Celene was fortunate to be able to attend a business conference in 2010 that was held on the island of Tasmania, an isolated island-state off Australia’s south coast.

Celene flew 1,800 miles from Tasmania to Connellan Airport in Australia, about 20 minutes away from this natural wonder.

Celene estimates that this entire trip, which includes round trip from Houston to Tasmania, and round trip from Tasmania to Uluru, she spent 50 hours in the air over 4 days, but felt it was worth it for this “Once in A Lifetime Trip.” 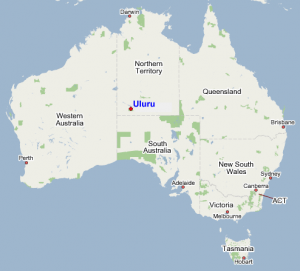 Uluru   pronounced: ool-or-roo (also known as Ayers Rock and) is a large natural sandstone rock formation located in the Northern Territory of Australia. It stands at a massive 1,141 feet tall and measures 5.8 miles in length, and it is estimated that 1.5 miles of the rock extend below the ground.

The sandstone that makes up Uluru is estimated to be around 600 million years old.

Uluru is a sacred site to the Anangu tribes of Central Australia, the indigenous peoples of the Western Desert.

Although it was ‘found’ by William Gosse working under the South Australian Government in 1873 CE, the Anangu people have lived and inhabited the area for more than 30,000 years and still remain to this day. The name ‘Ayers Rock’ was given by Gosse in honor of the South Australian Premier at the time, Sir Henry Ayers.

Uluru is home to many ancient petroglyphs and rock paintings. For the locals, including the Pitjantjatjara and Yankunytjatjara (both are indigenous language groups), the site also holds sacred traditions, culture, and rich history. Uluru, along with the surrounding Uluru-Kata Tjuta National Park, is listed as a UNESCO World Heritage site.