To be a Planet, Or not to be, a Planet

Why isn’t Pluto a planet anymore? Well, if you ask me, it is a planet. In 1987, I met Clide Tombaugh, the man who discovered Pluto, but that was long before Pluto’s status as a planet was being questioned.

So, why is Pluto’s planetary status in question?

The reason being given is that for a long time there wasn’t a good definition to what a planet was. Scientists had found nine objects that orbited our Sun, that were large enough to be seen through telescopes.

Eight of them were obviously planets, but they found that, there was a disturbance in the orbits of some of the last four planets, ( Jupiter, Saturn, Uranus, Neptune ) and decided that it must be another planet, in orbit around the sun past the orbit of the planet Neptune.

In 1929, The Lowell Observatory in Flagstaff, Arizona hired Clide Tombaugh, who was 23 years at that time, and gave him the job of performing a systematic search for a trans-Neptunian planet ( also called planet X ), which had been predicted by astronomer Percival Lowell, who had built the observatory in 1894.

Tombaugh used the observatory’s 13-inch astrograph ( a telescope designed for taking astronomical photographs ) to take photographs of the same section of sky several nights apart. He then used a blink comparator to compare the different images. When he shifted between the two images, a moving object, such as a planet, would appear to jump from one position to another, while the more distant objects such as stars would appear stationary. Tombaugh noticed such a moving object in his search, near the place predicted by Lowell, and subsequent observations showed it to have an orbit beyond that of Neptune. This ruled out classification as an asteroid, and they decided this was the ninth planet that Lowell had predicted. The discovery was made on Tuesday, February 18, 1930, using images taken the previous month. The name “Pluto” was suggested by an 11-year-old English schoolgirl, Venetia Burney. It won out over numerous other suggestions because it was the name of the Roman god of the underworld, who was able to render himself invisible, and because Percival Lowell’s initials PL formed the first 2 letters. The name Pluto was officially adopted on May 1, 1930.

Following the discovery, starting in the 1990s, of other Kuiper belt objects, Pluto began to be seen not as a planet orbiting alone at 40 AU, but as the largest of a group of icy bodies in that region of space. After it was shown that at least one such body was more massive than Pluto, on August 24, 2006 the International Astronomical Union (IAU) reclassified Pluto, grouping it with two similarly sized “dwarf planets” rather than with the eight “classical planets”. 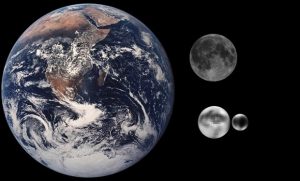 ( The Image to the left is the Earth and the MOON, and under the MOON  there is a comparison to the planet Pluto and Pluto’s Moon )

But here is some good news:

All of us Planetologists can rejoice today because, as of October 1, 2014, Pluto is once again a planet, eight years after being relegated to the status of dwarf planet by the International Astronomical Union (IAU).

According to the audience at a debate at Harvard University, in September 2014. Astronomers at the Harvard-Smithsonian Center for Astrophysicists (HSCFA) which debated the topic “What is a planet?”

The debate was needed following the confusion that arose once Pluto was deemed too small to be a planet. The defining characteristics of a planet (a round thing which orbits the Sun and has ‘cleared the neighborhood’ around its orbit) “baffled the public and classrooms around the country,” according to the HSCFA.

Astronomer Owen Gingerich pointed out that the word “planet” (derived from the Greek for ‘wanderer’) “is a culturally defined word that has changed its meaning over the ages,” and that Pluto definitely meets the criterion set out by fellow debater Dr. Dimitar Sasselov as ‘the smallest spherical lump of matter that formed around stars or stellar remnants.”

But Gareth Williams, associate director of the IAU’s Minor Planet Center argued that because there are many other solar bodies the same size as Pluto, they would have to also be considered planets, and that would be confusing for schoolchildren. If Pluto is a planet, the number of planets in our solar system could rise to 25, “with the possibility of 50 or 100 within the next decade.

Do we want schoolchildren to have to remember so many? No, we want to keep the numbers low.” As an argument for keeping Pluto at the kiddies’ table, that seems pretty weak.

The audience thought so too, and voted to restore Pluto to planet status.

That is Good News for these Plutonians, like myself

Here is even More Good News:

In July 2015 the New Horizons spacecraft was the first to visit Pluto and carried an instrument named Venetia Burney Student Dust Counter in honour if the 11 year old student, who in 1930 named the planet.

Click the link below to see a video that I took of the news show CBS This Morning. It is a two-minute video of their reporting of the New Horizon’s arrival at Pluto.

Reflections of Clide Tombaugh, by his family (video)   7 minutes

He talks about how he discovered Pluto   8 Minutes