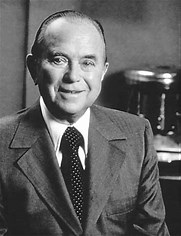 One of my favorite success stories, along with Chester Carlson of Xerox, Philo Farnsworth who invented TV, and John Houbolt: The Man who knew the way to the Moon, is Ray Crock, who built The McDonald’s Corporation.

To find coloring books for kids and adults, which consist of beautiful black and white designs for coloring, that can be personalized with the owner’s name in the title and in the titles of all of the inside pages,

I have posted blogs recently about the other three, and now I will briefly tell you the Ray Crock, McDonalds story.

Ray Crock is credited with the following quote:

“The two most important requirements for major success are: first, being in the right place at the right time, and second, doing something about it.”

That was certainly true about Ray.

Ray was born in 1902 in the Chicago suburb of Oak Park, IL.   In 1917, at the age of fifteen, Ray lied about his age and was accepted by the Red Cross to serve as an ambulance driver in the First World War, a position for which he trained alongside Walt Disney.

At one time, Ray worked for room and board at one of Ray Dambaugh’s restaurants in the Midwestern United States to learn the restaurant business.

Between the end of WWI and the early 1950s, Ray tried his hand at a number of various trades, including a highly successful stretch as a Lily paper cup salesman, pianist, jazz musician, band member and radio DJ at Oak Park radio station WGES.

He eventually segued the income he earned selling Lily paper cups into an even more lucrative career as a multi-mixer milkshake machine salesman, traveling across the country, beginning during WWII.

In 1954, Ray was the owner of a company that provided restaurants with the multi-mixer milkshake machines.

When Ray received an order from the founders of McDonald’s, brothers Richard “Dick” and Maurice “Mac” McDonald for eight machines, it left him curious. Up until that time, the most that had been ordered at a time had been one multimixer, as the age of the “soda jerk,” so popular up until the late 1940’s, and had been the bulk of Ray’s business, had been on the decline.

Ray was impressed with the cleanliness of the establishment and with the speed with which customers were served. He saw that the business had great potential.

Convinced that the setup of this small chain had the potential to explode across the nation, Ray offered his services to the McDonald brothers who were looking for a new franchising agent.

Ray, who would remain active in Des Plaines for the rest of his life, would frequently phone the manager of his flagship store across the street to remind him to clean his restaurant properly.

The Des Plaines location boomed, raking in hundreds of dollars on its opening day. Ray franchised out scores of restaurants to eager franchisees. The brothers were satisfied with the money they had, though, and did not feel a pressing need to expand their empire.

By 1960 there were 228 McDonald’s franchises in the country. But to expand as he dreamed, Ray needed fiscal experience and contacts in banking. He got both by bringing in a partner, former Tastee-Freez executive Harry Sonneborn, who worked out a lucrative plan for the parent corporation to lease restaurant sites as well as sell franchises

Ray eventually became increasingly frustrated with the brothers’ desire to maintain only a small number of restaurants, so, in 1961, he bought the company for $2.7 million, enough to pay each brother $1 million each after taxes.

By 1972 Ray was wealthy enough to celebrate his 70th birthday by giving more than $7.5 million to charity, part of it to his own Kroc Foundation, which supports research in diabetes, arthritis and multiple sclerosis. The philanthropic endeavor, which he launched with wife Joan, was dear to his heart, as Kroc himself became afflicted with diabetes and arthritis in his later years.

In 1973, he resigned from his post as corporation’s CEO, handing the job to Fred Turner, who had worked as a cook in Kroc’s first McDonald’s franchise and had been named president in 1968. Turner had also helped Kroc launch Hamburger University in 1961, which now serves as a training ground for McDonalds restaurant employees.

As CEO of the McDonald’s Corporation, Kroc amassed a fortune of 500 million dollars.

Ray was named by Time magazine as one of the “100 Most Influential People” in the category, “Titans of Industry”.

Ray was married three times, first marrying his high school sweetheart, Ethel Fleming, in 1922; the couple divorced in 1961, upon his acquisition of the McDonalds Corp. His second marriage was to Jane Dobbins Green (1963-68), a secretary, which also ended in divorce. His third marriage, to the former Joan Mansfield Smith, a recently divorced ex-wife of one of his early franchisees, Rowland F. Smith, a WWII Navy veteran, was on March 8, 1969.

Ray died of heart failure at a hospital in San Diego, California on 14 January, 1984 at age 81.  Upon his passing, his wife Joan inherited his fortune, estimated at $500 million. By the time of Kroc’s death, McDonald’s had 7,500 locations in 31 countries and was worth $8 billion. His wife Joan also inherited ownership of the San Diego Padres MLB team, on the team jerseys, his initials, “RAK” were emblazoned on the left sleeve of the jersey that year, as the team then went on to win the National League Pennant in 1984, losing to the Detroit Tigers in that year’s World Series. Joan, who carried on husband Ray’s legacy of philanthropy, in contributing to many charitable causes herself, died in October 2013 of brain cancer.

Ray Kroc was portrayed by actor Michael Keaton in the 2016 film The Founder. Critics praised Keaton’s performance for his portrayal of Ray Kroc.