How did the Starship USS Enterprise get designed

I have always been a Star Trek fan from the very first episode that I saw of the TV series. The episode was, “Charlie X.” which was the second episode of the first season of the Origional series.

Star trek has millions of fans, but not all of them know the story of how the fabulous starship USS Entereprise was designed.

That is what I will be relating TODAY:

When Gene Roddenberry received the “go ahead” in 1964 from Desilu Studios, to produce Star Trek, he was introduced to Matt Jefferies, a designer at Desilu, who was assigned by the studio to work with Gene to design a ship, the USS Enterprise, for the twenty-third century.

Jefferies had previously worked at Northrop, an aerospace company associated with NASA, and was also a pilot in World War II, like Gene.

Jefferies, was not a science fiction fan, and based his work on the concepts of Gene, who did not really know what he wanted The USS Enterprise to look like.

Jefferies original order from Roddenbery was for it not to look like “a conventional rocket or spacecraft currently appearing in sci-fi.”

–No rockets and No Jets

–There should be multiple engines, as on an airplane, to provide redundancy.

–The bridge should be up at the top, like a pilot’s cockpit.

–There were two primary parts, the crew part and the engineering part. The engineers are belowdecks, while the crew is in the saucer-shaped section. (Which was originally going to be a sphere, spheres being so practical in space, but … well, it just looked weird.)

Roddenberry further specified that the Enterprise would operate mainly in space, have a crew of 100-150, and be incredibly fast. Both Jefferies and Roddenberry did not want the Enterprise to look like any of the rocket ships already used by the aerospace industry or in popular culture.

Jefferies initially rejected a disk-shaped component, believing it to be too simular to flying saucers, and designed a spherical module eventually flattened into a saucer.

Roddenberry was drawn to a sketch of the Enterprise resembling its final configuration. Jefferies had created a small model of this design that, when held from a string, showed the warp engines below the saucer, but Roddenberry turned it over, and it resembled the shape we know today.

The Enterprise was originally going to be named Yorktown, but Roddenberry said he was fascinated by the story of the actual Enterprise and that he had “always been proud of that ship and wanted to use the name.”

The ship’s NCC-1701 registry stems from NC being one of the international aircraft registration codes assigned to the United States. The second C was added because Soviet aircraft used Cs, and Jefferies believed a venture into space would be a joint operation by the United States and Russia. NCC is the Starfleet abbreviation for “Naval Construction Contract”, comparable to what the U.S. Navy would call a hull number. Jefferies rejected 3, 6, 8, and 9 as “too easily confused” on screen; he eventually reasoned the Enterprise was the first vessel of Starfleet’s 17th starship design, hence 1701.

The Making of Star Trek explains that USS means “United Space Ship” and that “Enterprise is a member of the Starship Class”. The ship was changed to Constitution class with the release of Franz Joseph’s Star Fleet Technical Manual in 1975.

The first miniature built from Jefferies’ drawings was a four-inch scale model. Desilu Studios, which was producing Star Trek, hired experienced film and television modelmaker Richard C. Datin to make a pre-production model. Datin used a subcontractor with a large lathe for major subcomponents and otherwise worked on the model for about 110 hours in November 1964. The 33-inch (0.8 m) model was made mostly of pine, with Plexiglass and brass details. Datin made minor changes after Roddenberry’s review, and he submitted the completed, first filming model – which cost about $600 – to Desilu in December 1964. 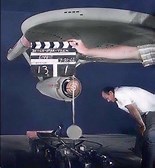 Desilu then ordered a larger filming model, which Datin contracted to Volmer Johnson and Production Model Shop in Burbank. Datin supervised the model makers and did detail work on the model, which was constructed from plaster, sheet metal and wood. When completed, it was 11 feet 3.5 inches long, weighed 276 lb., and cost $6,000. 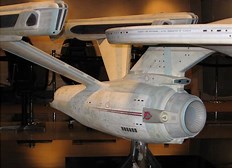 The filming model was delivered too late to be used much for the initial pilot, “The Cage“. The 11-foot model was initially filmed by Howard Anderson. When Roddenberry was approved to film the second pilot, “Where No Man Has Gone Before” (1966), various details of the 11-foot model were altered, and the starboard windows and running lights were internally illuminated. When the series went into production, the model was altered yet again, and the model was regularly modified throughout its active filming. Most of the fine details on the large model were not visible to television viewers.

Howard Anderson could not keep up with the filming and special effects needs for regular production, so producers hired several other studios to contribute effects and additional footage. Motion control equipment was too expensive, so the ship was filmed with stop motion. Filming was often delayed by the heat generated by the studio and model’s lights. Special effects were produced as cheaply as possible. Most third-season footage of the Enterprise was reused first- or second-season footage. Animators for Star Trek: The Animated Series (1973–75) rotoscoped Enterprise footage to recreate the ship’s movements, contributing to the impression of the animated series being a fourth season of the original. The animated medium could not support some of the ship’s lighter colors, so the Enterprise was depicted as a consistent gray.

For the Star Trek: Deep Space Nine episode “Trials and Tribble-ations” (1996), Greg Jein created a model exactly half the size of the original 11-foot Enterprise model, and it was the first production model of the starship to be built in more than 30 years. A CGI model of the ship makes a cameo appearance at the end of the Star Trek: Enterprise series finale, “These Are the Voyages…” (2005). Artists creating another CGI version of the Enterprise for the remastered television show had to ensure the model was not so detailed that it was incongruous with the overall 1960s production.

The Enterprise was meant to serve as a familiar, recurring setting, similar to Dodge City in Gunsmoke and Blair General Hospital in Dr. Kildare. Reusing sets also helped address Desilu’s budget concerns. As production continued, standing sets like the engine room and bridge became increasingly detailed. The bridge was monochromatic for “The Cage”, but it was redecorated for “Where No Man Has Gone Before” because of the increasing popularity of color televisions. Roddenberry described the ship’s hallways as “Des Moines Holiday Inn Style”. The ship’s chairs were manufactured by Burke of Dallas and similar to the original tulip chair designed by Eero Saarinen. Full interior deck plans of the Enterprise were designed by Franz Joseph in 1974, with approval from Roddenberry. At Roddenberry’s direction, sound effects designer Douglas Grindstaff created different sounds for different parts of the vessel. Console sound effects were often created with a Hammond electric organ or other musical instrument, and engine sounds were created in part with a noisy air conditioner. Although the ship’s interior in The Animated Series was largely recreated from the live action series, a second set of turbolift doors was added to the bridge in response to Roddenberry being asked, “What do they do if the doors get stuck?”

The Enterprise bridge was partially recreated for the Star Trek: The Next Generation episode “Relics” (1992). The original set had long been torn down, and producers initially planned to use the film-era set. Ultimately, the engineering console, props and recreations of the captain’s chair and navigation console were rented from fans, and the rest filled in with archival footage and greenscreen technology. Both the exterior and interiors of the Enterprise were created for the Deep Space Nine episode “Trials and Tribble-ations” four years later. As with “Relics”, the bridge was partially recreated and other parts were added digitally. Mike Okuda used a computer to recreate the graphics seen on the Enterprise sets, and others were drawn by artist Doug Drexler. Set designer Laura Richarz’s biggest challenge was finding Burke chairs to populate the ship; she found a single one, and from that the production team made molds to create more.