Cleopatra, A Great Beauty, or No? 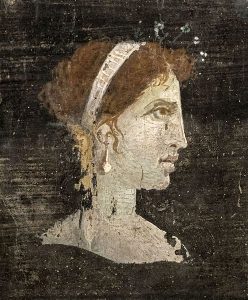 This is a posthumous portrait of Cleopatra, made during the 1st century AD

Popular culture over the centuries has made Cleopatra out to be a great beauty. Considering that she was able to woo two great Roman leaders, Julius Caesar and Mark Antony, that assumption seems to be founded.

But, when Caesar entered Egypt to follow Pompey during the Roman Civil War, Cleopatra was a co-ruler with her brother, Ptolemy XIII. Being a female, though, meant that she was expected to sit on the sidelines while her brother did all the hard work of being a ruler. However, Cleo wasn’t about to have any of that, and, after 3 years of economic failure, she pushed her brother (who was also her husband) to the side and began leaving him out of all official documents, as well as having her image only stamped on Egyptian coins.

She ended up pissing off a number of very powerful people, and eventually was forced from power and into exile while her brother/husband took sole control of the country.
When Caesar showed up, Cleo figured this would be a perfect opportunity to one up her brother and regain her power. She sneaked into Caesar’s apartments, and presented her case.

Caesar, more focused on hunting Pompey and ending the war, probably wasn’t keen on getting involved in a family squabble, except for two things…

•       Cleopatra was willing to make a deal with Caesar, which would give him large control over Egypt, which was considered the breadbasket of the Mediterranean. Securing control to this resource would make Caesar hugely popular. All he had to do was help Cleo wrest control from her brother.
•       Ptolemy, also wanting to get Caesar’s help in getting rid of his sister, caught and murdered Pompey. This had the opposite effect of what Ptolemy expected, and aligned Caesar with Cleo when she finally arrived to meet with him.

After a campaign against Ptolemy, the two forces met in the Battle Of The Nile, where Ptolemy was drowned.

This left Cleo as sole ruler.
Cleopatra was eager to gain Rome’s alliance, so she married Caesar, and had a son by him. She had hopes that Caesar would name her son, Ptolemy XIV, as his successor to the Roman throne.

The Romans didn’t quite like this idea of a foreigner possibly ruling Rome, and this was one of the grievances which led to Caesar’s assassination.

After Caesar’s death, a three co-rulers triumvirate took power in Rome. One of these Triumvirates was general Mark Antony, while another was the adopted son of Caesar, Octavian, who later became Augustus Caesar.

After some problems, the three rulers split up the empire, with Mark Antony getting Egypt. He met, and eventually married Cleopatra, and their tragic end is all well documented history.

In the ancient world, and even sometimes in our modern one, people of power marry to consolidate their power. This is why very rich people often marry other rich people, and marrying a less wealthy person is often frowned upon.

So, it was serendipitous that the ruler of Egypt was a woman, who could be married, consolidating both countries powers.

By all contemporary accounts, Cleopatra wasn’t all that exceptional in the looks department. Her images in coins and in statuary show a very plain looking woman.
 
It wasn’t until later generations, romanticizing her tragic love to both Caesar and Antony, that her looks became legendary.

It’s more romantic to believe they married for love and looks rather than power.

This isn’t to say there wasn’t love. After Cleo’s and Antony’s failed campaigns to take the Roman Empire, Both were taken prisoner.

After hearing of the death of Mark Antony, it’s reported that she had an asp smuggled into her rooms, where she let it bite her on the breast.